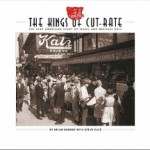 Kansas City Star Books has published a winner with its new “The Kings of Cut-Rate: The Very American Story of Isaac and Michael Katz,” by Brian Burnes and Steve Katz.
The authors had great material to work with, starting with the rags-to-riches story of the Katz brothers and including dozens of vivid images of their marketing mastery, many featuring the unforgettable grinning-cat logo.


The book touches on Kansas City music history, mainly the 25-plus-year run of Katz Drug Co.’s annual, free Philharmonic concert. It notes that Katz stores sold lots of phonograph records among the other non-pharmacy merchandise that made them a sort of progenitor to Walmart.
The big chains ate away at Katz Drug Co. by the time of its 1970 merger with Skaggs.
But Katz was riding high on Sept. 9, 1954, when it opened its new store in Memphis’ Lamar-Airways Shopping Center. And who played atop a flatbed truck in the parking lot as opening-night entertainment? None other than Elvis Presley backed by guitarist Scotty Moore and bassist Bill Black, just six weeks after the release of his first Sun single, “That’s All Right Mama.” The book has a two-page spread recounting the evening, including a photo taken that night by Opal Walker.
The Kansas City Katz stores promoted Elvis records in ads when he came to town May 24, 1956, for a concert at Municipal Auditorium. They did likewise with Beatles merchandise when A’s owner Charlie Finley brought the Fab Four to Municipal Stadium for a concert Sept. 17, 1964.
Burnes and Katz will discuss “Kings of Cut-Rate” at 2 p.m. Sunday, Oct. 30, at the Plaza Library. More information is available, and RSVPs for the event are requested, at www.kclibrary.org.